Home— News— Mr. and Mrs. Stodola: Serial killers among us

As true crime explodes globally, its ripples are reaching the Czech Republic, impacting television and cinema production. Historically, the exploration of dark human impulses here has been mainly a small-screen affair, a prime example being the 1970s Czechoslovak crime series The Thirty Cases of Major Zeman. Although the show was intended as a propaganda tool to showcase the work of the police under the Communist regime, one episode, titled “The Well,” attained cult status, entering the unofficial canon of Czech horror.

Driven by popular demand, crime series based on actual cases, whether closely or loosely, have become the biggest genre on Czech TV. One domestic video-on-demand service commissioned two new crime miniseries: one, titled The Roubal Case, directed by Tereza Kopáčová, revolving around the 1990s Czechoslovak serial killer Ivan Roubal; the other, titled Guru, directed by Biser Arichtev, about a yoga teacher who sexually abuses his students, also based on real events.

Meanwhile early-career scriptwriter Miro Šifra is at work on a cinematic reimagining of “The Well,” about the nefarious 1968 Jelínek family murders, to be directed by Peter Bebjak. Up to now, however, the pinnacle of big-screen true-crime drama in the Czech Republic has been I, Olga Hepnarova, the potent feature-length debut by Tomáš Weinreb and Petr Kazda, about the notorious Czech mass murderer who was executed for her crimes at the age of 23.

Šifra, in collaboration with Lucie Vaňková and Marie Stará, also penned the script for the miniseries The Attachment Theory, based on the most bizarre domestic case in recent history, involving the Boy Scouts, a Grail Movement cult, pedophiles, Azerbaijan, falsified documents, and altered identities. The award-winning, Slovenian-born, Prague-based director Olmo Omerzu (Bird Atlas, Winter Flies) is helming the miniseries, about a loving mother and her two children whose relationship is disrupted by the family’s adoption of a 13-year-old autistic girl, who turns out to be not quite who she claims to be.

The stranger-than-fiction crimes portrayed in The Attachment Theory demonstrate what may be concealed behind the veil of a seemingly ordinary life. Working in a similar vein, documentary filmmaker Petr Hátle is now shooting Mr. and Mrs. Stodola, about the infamous killing spree by a husband and wife in the early 2000s. 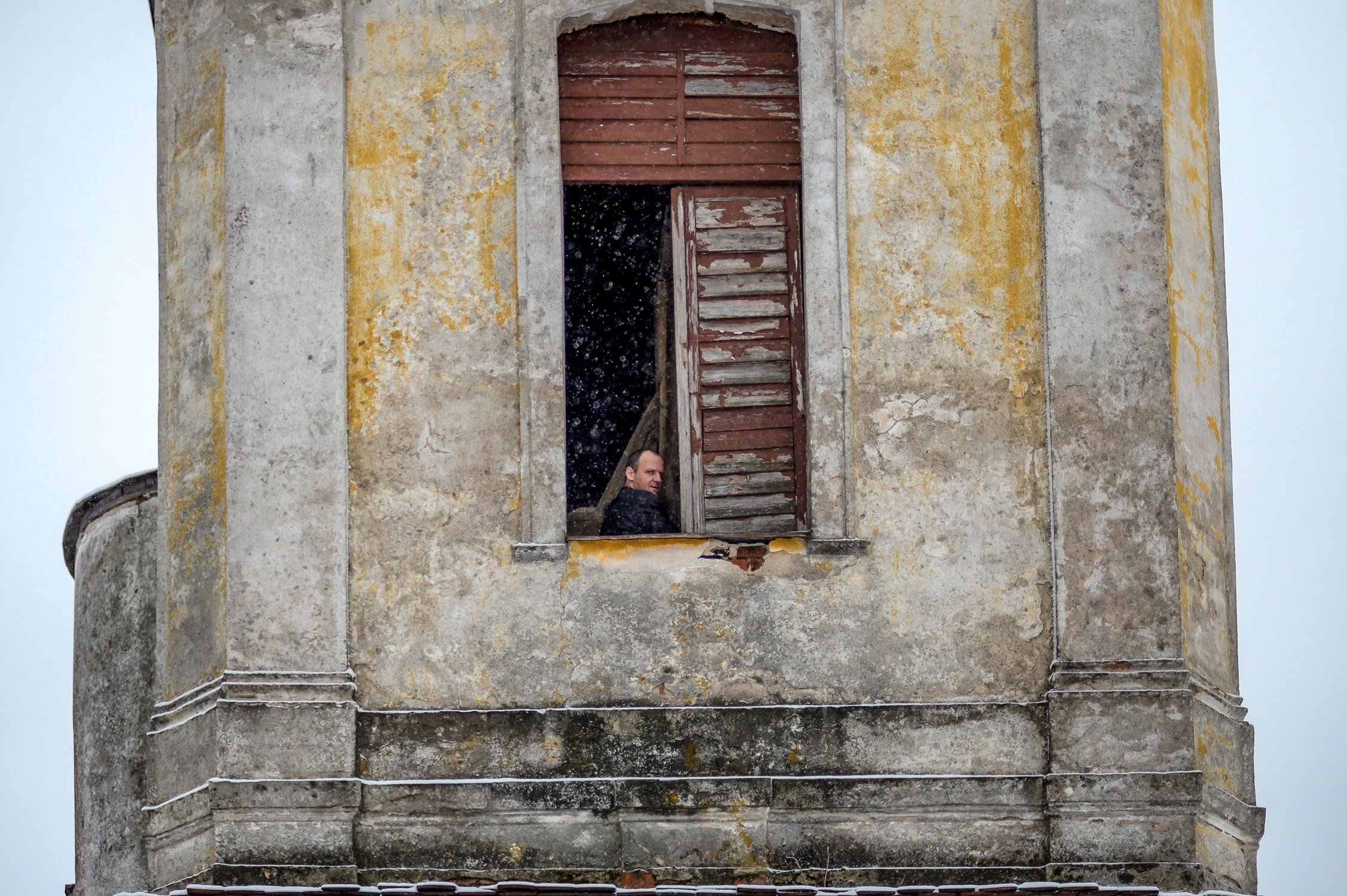 Czechs were shocked to learn an ordinary couple was behind a string of reprehensible murders of senior citizens in 2003, when the names of Jaroslav and Dana Stodola entered the Czech crime annals, alongside killers like Olga Hepnarová and neonatal nurse Marie Fikáčková, who was hanged in 1961 for killing newborns.

Hátle began work on his film about the Stodolas over five years ago, when he brought the topic to producer Tomáš Hrubý of nutprodukce, the young and ambitious domestic production outfit behind HBO’s prestigious series Wasteland and Burning Bush. The two men have been collaborating ever since they studied together at FAMU, where Hátle currently teaches a course on experimental TV. Nutprodukce produced Hátle’s first feature documentary, The Great Night, about the subcultures of nocturnal Prague, and the portmanteau film Gottland, which included Hátle’s short The Virginity of Lída Baarová.

During the development stage of his film on the Stodola murders, Hátle continued working on other projects, one of them being Missing, about the inexplicable vanishing of a 14-year-old Czech girl near the Polish and German borders in 1997. The project was originally intended to be a documentary, but the unwillingness of the subjects to appear in front of the camera forced the filmmakers to abandon the production and instead turn it into a podcast of the same name.

Missing also touched on the larger topics of social banishment and loss of trust in institutions, which typically have been overlooked amid the sensationalist coverage of the case. In portraying the deeds of Dana and Jaroslav Stodola, Hátle employs the same approach, and the project shares the same genesis as Missing, as Mr. and Mrs. Stodola too was initially conceived as a documentary film.

Yet, according to producer Tomáš Hrubý, the decision to make the switch to fiction came as a natural step once the story arc began to emerge and the couple’s atypical power dynamics came into sharper focus. Hátle’s yearlong work on the screenplay continued in close collaboration with script consultant Lucia Kajánková, a rising filmmaker in her own right, and led to their splitting the story into two planes, the first focused on the perverse romance of the central pair and the second preoccupied with the broader implications of their acts. 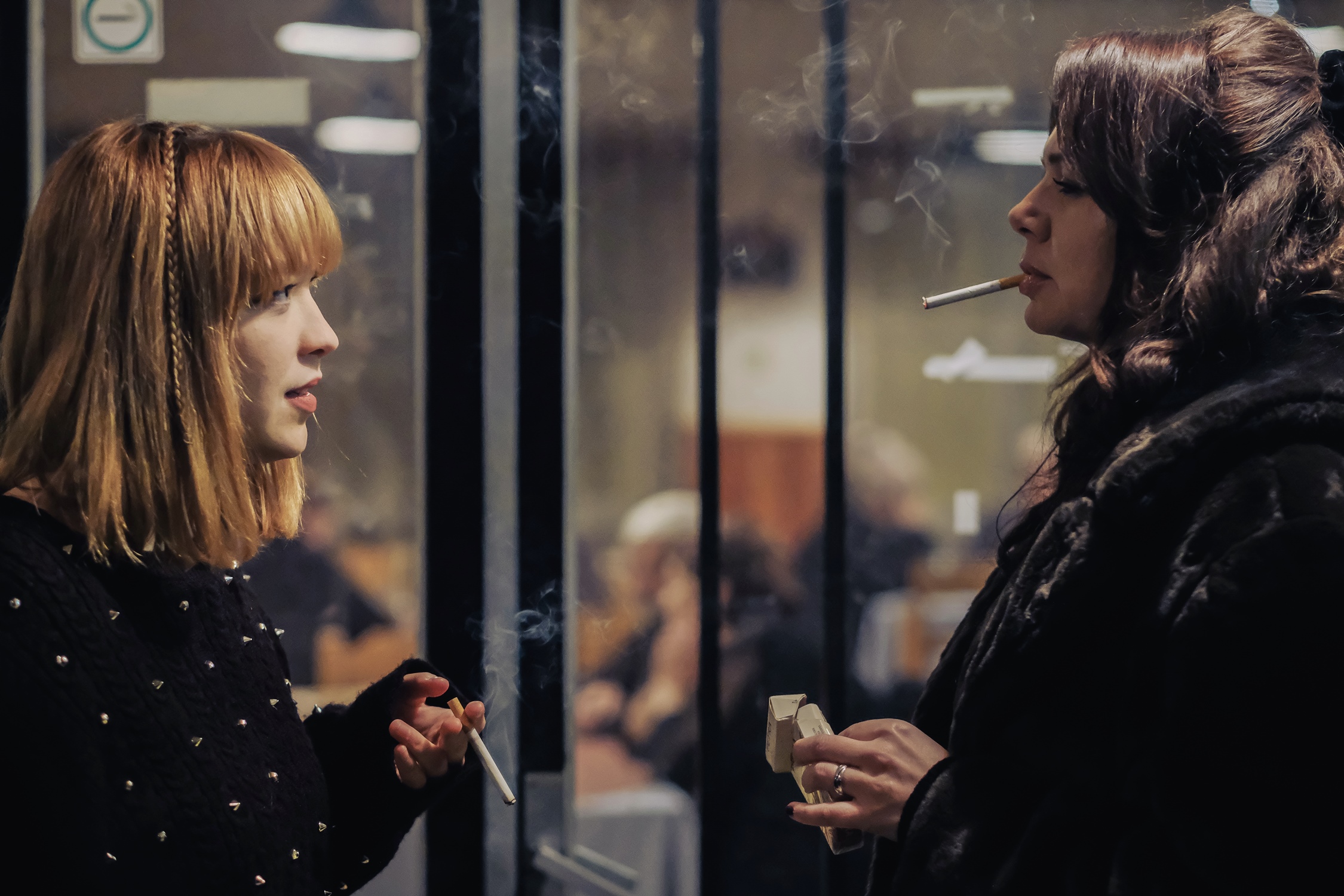 The mundanity of evil

Dana married when she was fifteen, had a daughter a year later, moved to Canada with her second husband, and worked as a dancer in a bar. She then divorced and returned home to Slavošov, where she married Jaroslav, who was known around town as a quiet man. Neither of them was able to find steady employment and they soon hit financial troubles. Mr. and Mrs. Stodola starts shortly before they commit their first murder, of a neighbor they know very well, in a burglary gone haywire.

The scene of the killings is a sleepy hamlet abandoned by its younger inhabitants in pursuit of a more promising livelihood. As a result, the village is made up mostly of senior citizens, many of whom are already living on their pensions. The film was shot on location in the district of Kutná Hora, where the crimes actually occurred.

Hátle chose Jaroslav as the protagonist of the film, so the audience views the couple’s manipulative relationship from his perspective. In researching the case, Hátle had the investigator’s files at his disposal, which helped him fill in the blanks in the Stodolas’ personal life and determine the most plausible explanations that drove them to their pathological behavior.

Jaroslav’s codependence makes him susceptible to Dana’s whims, and she is adept at exploiting his jealous rage in order to accomplish her twisted goals. For her part, Dana is intoxicated by the power she wields over others’ lives, and this fuels her bloodlust. Unlikely Jaroslav, she is a true psychopath.

Hátle’s film transcends the boundaries of mere crime reconstruction. Mr. and Mrs. Stodola is an anatomy of evil in its most banal and mundane form. The story maps how a pair of ordinary working-class people can turn into a menace to society. It shows the terrifyingly thin line between normal and abnormal, and how petty crime can snowball into serial killing. In this, Hátle’s film ventures into the territory of Michael Haneke’s filmmaking.

In a larger sense, the story reveals how easy it is for despicable acts to happen when they target the most vulnerable and marginal members of society. Senior citizens become easy prey, and in this instance, institutional apathy enabled the senseless killings to continue unchecked. 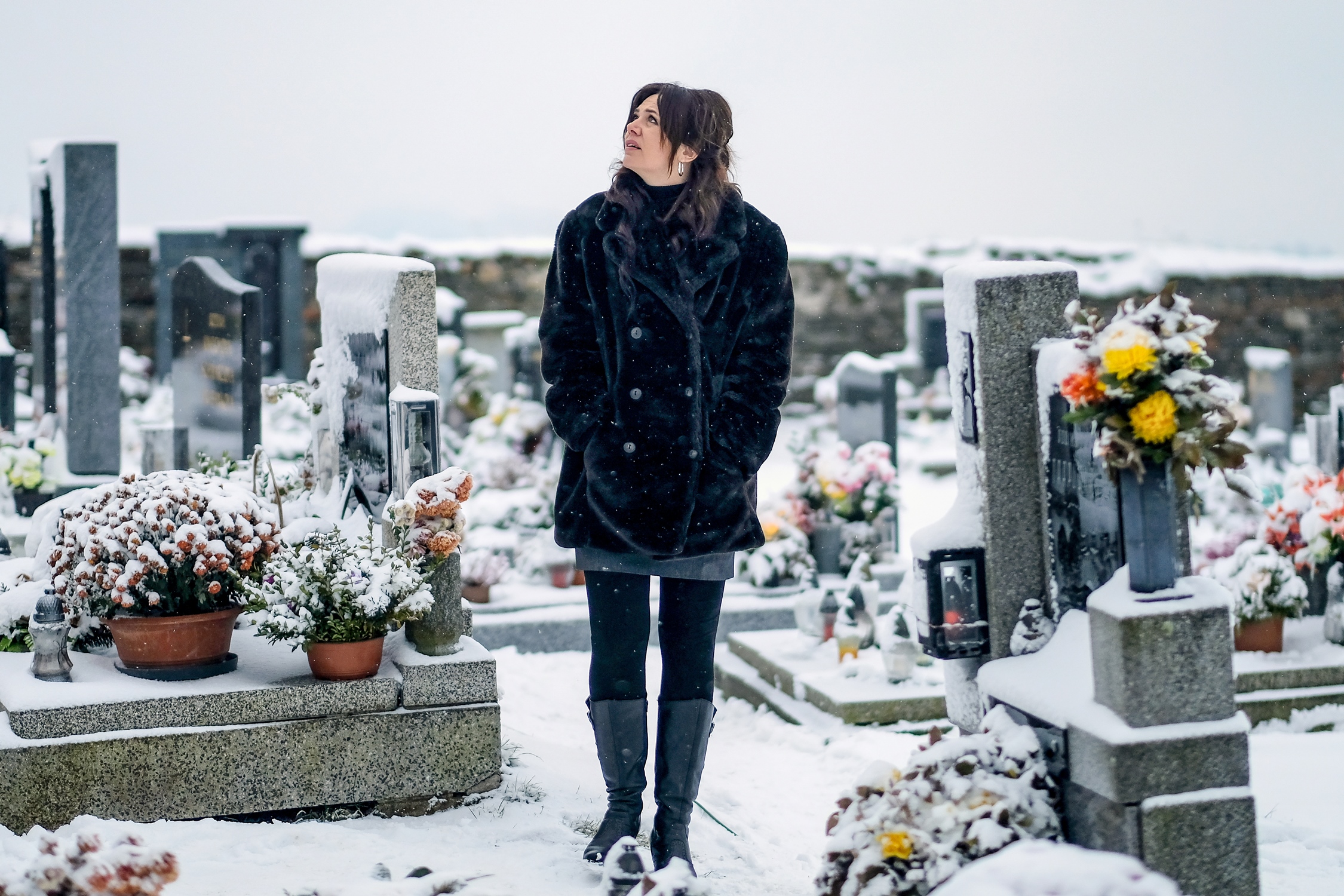 Mr. and Mrs. Stodola went into production in September 2021, with the first clapperboard slamming in December. While the film crew consisted of industry professionals, their number on set was limited to only the most essential roles. As Hrubý pointed out, this means the production is a green shoot by default. Cast as Dana is Lucie Žáčková, who previously won the Czech Lion for Best Supporting Actress in Jan Prušinovský’s dramedy The Snake Brothers. She also starred in Petr Zelenka’s version of The Brothers Karamazov, and more recently in Zdeněk Jiráský’s period drama Kryštof.

The naïve husband Jaroslav is portrayed by Jan Hájek, who mostly acts in theater, though he has a role in the upcoming period biopic The Last Race, by Tomáš Hodan, and also starred in The Snake Brothers. Oddly enough, Žáčková and Hájek portrayed a married couple in Prušinovský’s film as well, though producer Hrubý says they didn’t realize it until after the leading pair had already been cast.

Mr. and Mrs. Stodola also continues the fruitful collaboration between Hátle and cinematographer Prokop Souček, who has lensed all of Hátle’s previous efforts, including The Great Night, which has a significant visual component and, like the latest film, was also shot for the big screen. The Great Night screened in the main competition of CPH:DOX, which is the leading film festival for innovative works, as well as winning Best Czech Documentary at IFDF Jihlava and the Golden Kingfisher for Best Documentary at Finále Plzeň.

Hátle noted that his approach in his current project is similar to the one he took for The Great Night, when he spent time with ex-cons, trans prostitutes, and drug-addicted mothers in order to paint an accurate portrait of nighttime Prague. The director hopes to capture “fates that may be hidden to the average person, yet testify about the world with power and fragility.”

Souček was also behind the camera for the Locarno-winning documentary by Francesco Montager, Brotherhood, and the documentary Yallah! Underground. As with The Great Night, he will be using a minimum of lighting and work mostly with natural light on the set of Mr. and Mrs. Stodola.

Hrubý confirmed that they plan to finish production by June 2022, with postproduction expected to last until September, so the film will be fully ready by the end of 2022. Mr. and Mrs. Stodola does not have yet a sales agent. The producer said he plans to start talking to international sales agents after the rough cut is complete, around May. Since the film is a coproduction between the Czech Republic (Hrubý at nutprodukce) and Slovakia (Jakub Viktorín at nutprodukce offshoot nutprodukcia), theatrical release in both countries is already secured. Rights remain available for other territories.

Both the Czech Film Fund and the Slovak Audiovisual Fund have supported the project, with Czech Television boarding the independent arthouse drama as a coproducing partner. Hátle noted that the film’s topic is controversial and unorthodox, and “offers an opportunity to explore a new space that has been avoided in Czech cinema.” The director has already proven himself as someone who is not a fan of formulaic crime stories and has made it clear that he prefers to break new ground, as he did with the Missing podcast.

As someone who works against genre tropes, Hátle said Mr. and Mrs. Stodola differs from “celebrity” portraits of serial killers, employing a more socially conscious approach. Through the character of Jaroslav, he explores both how and why the crimes happened, bearing in mind that the murders were committed against people on the fringes of society.

As far as the depiction of violence is concerned, the director said there won’t be a drop of blood on screen in his film, and he will avoid depicting the murders in an exploitative way, again, as he did in his lauded podcast. 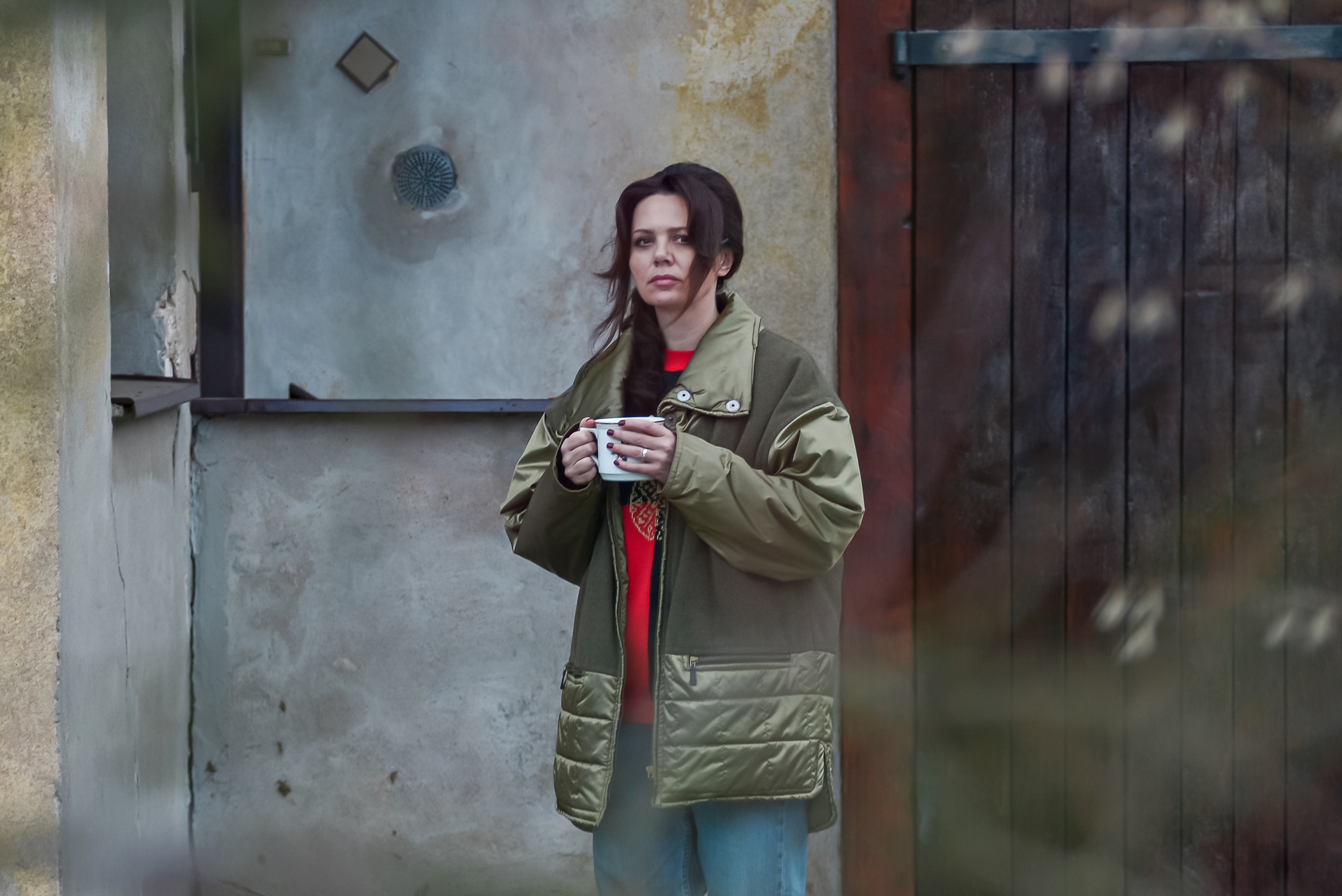 Nobody Likes Me: Otherness under the tyranny of the majority